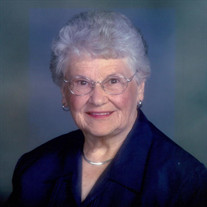 Ila "Dot" Graves, age 99, of Lakeside, Iowa died November 4, 2021 at Wel-Life in Alta, Iowa. Memorial Services will be Monday, November 22, 2021 at 11:00 a.m. at the United Methodist Church in Storm Lake, Iowa. Burial will be at Buena Vista Memorial Park Cemetery. Visitation will be one hour prior at the church. The Fratzke & Jensen Funeral Home in Storm Lake, Iowa is in charge of arrangements. Ila Mae (Dot) Graves was born September 11, 1922 to Walter and Lottie (Grinnell) Hughes at Logan, Iowa. Dot grew up the sixth child in a loving family of ten. She had six brothers and three sisters. She received her education at the rural schools in Harrison County. Dot’s father passed away when she was twelve years old and her mother became a mid-wife/care-taker which took her away from the home several days at a time. Dot was enlisted to look after the four younger children and keep the household running. She soon learned to get the meals on the table and “stretch” a dollar. The kids considered Dot to be a second mother and formed strong bonds that held true all their lives. In 1942, she was united in marriage to Harlow C. Graves at Papillion, Nebraska. To this union five children were born; Sharon Kay, Carol Ann, Stanley Harlow, Richard John and David Marshall. The couple farmed in Harrison County until 1945 when they moved to Buena Vista County. Their home became the place for Dot’s siblings, spouses and friends to gather, especially for pheasant hunting season. They lived on several farms over the years settling on their acreage near Sulphur Springs. They farmed there until retiring to their lake home on Mallard Drive in 1986. Dot was a loving, caring mother who supported her children in their activities as they grew up and encouraged them in their chosen endeavors. She was a super cook, baker, seamstress, and hostess. Dot loved nothing better than a big table surrounded by family and friends for a good home cooked meal. She loved to garden – In her younger years she planted both vegetable gardens and flower beds. In her later years she could be found shopping the greenhouses for the right combinations for her many flower pots on the patio. Dot loved the beauty of nature and cared for the birds and squirrels visiting the feeders. She looked forward to the migration of many birds each spring and fall and enjoyed the beautiful sunsets over the lake. She enjoyed watching the grandkids frolicking and splashing in the water. Dot was seen occasionally worming a hook and fishing on the dock with Harlow and would go for a ride in the boat if it didn’t go to fast! Dot was a magnet for children, her own and others. As the family grew she welcomed each new baby into her loving heart and arms. She loved watching them grow and was interested in all their milestones along the way. Dot and Harlow loved to travel and had many bus trips around the United States. They traveled to Europe, Hawaii and Canada. They spent several winters at their Caliente home in Arizona. They took in a few Chicago Cubs games during spring training in Mesa. Dot was a life-long member of the Methodist Church where she served on many committees. She enjoyed her neighborhood club and belonged to a couple card clubs. She and Harlow had a host of wonderful friends and in their younger years enjoyed a night out at the Cobblestone Inn in Lakeside. Dot and Harlow were always each other’s helpmates. They attended church regularly and cared about their church family. They grieved together the loss of their youngest son, David, in 1991. They struggled through their own health issues, taking turns in the hospital. In 2001 because of Harlow’s failing health, they flew home on a chartered jet. He passed away two days later. Together they shared 59 years. Dot remained at her lake home for twenty years maintaining it and keeping it the loving, welcoming place for all the family and friends to gather. She kept up on current events. She read her newspaper every day and made sure to watch The World News with Lester Holt at 5:30 and the local news at 5:00 or 6:00. She kept the “Wheel” turning and kept up on “Days”. She predicted the weather fairly well and although her formal education was short, she held self-taught degrees in Home Economics, Civics, Nursing, Psychology, Geography, Finance, and held a Master’s Degree in LOVE! A life well lived. She is survived by her children Sharon K. (Douglas) Nielsen, Tuscola, IL, Carol A. (Donald) Hansen, Storm Lake, IA, Stanley H. (Jean) Graves, Daleville, AL, and Richard (Mary) Graves, Storm Lake, IA, her grandchildren John (Sabrina) Graves, Leavenworth, KS, Jeremy (Trisha) Hansen, Newell, IA, Stephanie (John) Hudson, Sadorus, IL, S. Eric (Shelly) Graves, Little Elm, TX, Ryan (Aida) Graves, Madison, AL, Peter (Jennifer) Nielsen, Milton, GA, Anthony (Rob) Hempstock-Graves, Phoenix, AZ, Heidi (Rodney) Hansen-Bramble, Storm Lake, IA, Amy (Charles) McCarthy, Harvest, AL, Lisa (Chris) Cook, Clarksville, TN, Lori (Ryan) Russell, Cedar Rapids, IA, twenty-two Great Grandchildren, and fourteen Great-Great Grandchildren, her sisters Lottie Nelson (Jim Wilson), Storm Lake, IA, Bonnie (Glen) Holland, Pocahontas, IA, many nieces and nephews and their families, Special family friend Caroline Crank, WI, special furry friend Scout Patton and many other friends. She is preceded in death by her parents, husband, Harlow, father in law Johnny Graves, son David, sister and brother in law Marcella (Hank) Chamberlain, brothers and sisters in law Lyle (Veva) Hughes, Donald “Mike” (Margaret) Hughes, Clyde (Vera) Hughes, Glen (Genevieve) Hughes, Calvin (Esther) Hughes, Carl “Bucky” (Gladys) Hughes, sister in law Marie Hughes, infant twin Great Granddaughters Ashley Jordan and Peyton Amber Nielsen, infant Great-Great Granddaughter Maya Ann Mann.

The family of Ila "Dot" Graves created this Life Tributes page to make it easy to share your memories.

Send flowers to the Graves family.