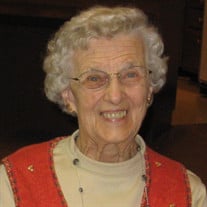 Hilda Wendel, age 95, of Storm Lake, Iowa formerly Schaller, Iowa passed away on Friday, April 9, 2021 at the Methodist Manor Retirement Community in Storm Lake. Funeral services will be held on Monday, April 12, 2021 at 10:30 a.m. at St. Paul Lutheran Church in Schaller. To watch the recording of the service, visit Hilda's tribute wall. Burial will be in the Schaller Cemetery. Visitation will take place on Sunday, April 11, 2021 from 3:00-5:00 p.m. at the Fratzke & Jensen Funeral Home in STORM LAKE. Masks and social distancing are recommended for all guests in attendance. The Fratzke & Jensen Funeral Home in Storm Lake is in charge of the arrangements. Hilda Dorothea Augustin was born on December 18, 1925 to Rudolph and Olga (Meyer) Augustin in Hay Creek, Minnesota, one of 10 children. She attended parochial school until the 8th grade. She was confirmed in her Christian faith on March 17th, 1940. On September 14, 1949, Hilda married Floyd Wendel at her country church Immanuel Lutheran in Hay Creek. To this union, 6 children were born. Prior to marriage, Hilda worked hard on her family farm and took care of her younger siblings. She also worked at the Red Wing Shoe factory for a short time. Hilda met Floyd by becoming a mother’s helper to his cousins Harvey and Lydia Koth in Alta, IA. From there the relationship began and continued with 60 years of marriage before Floyd’s death in 2009. Together they had plentiful gardens and lovely flower beds. They enjoyed attending all kinds of sporting events, music concerts, dance, and other activities of their grandchildren. Hilda was a wonderful cook and loved baking. She is known for her scotcharoo bars that had the special ingredient of love. She was described by many as a kind and soft-spoken lady who loved her Lord. After Floyd’s death she lived with her daughter Laurie and family in Storm Lake until her move to Wel Life in Alta in 2017. In early 2020, she moved to the Methodist Manor in Storm Lake. She was a member of St. Paul Lutheran Church in Schaller and was active in the Ladies Aid. Her family always knew she was praying for them and everyone knows that mom and grandma prayers always work. She is survived by her children: Phil Wendel of Galva, Iowa; Barb (Jerry) Landmesser of Fort Dodge, Iowa; John (Teresa) Wendel of Schaller, Iowa; Liz (Richard) Noll of Sioux Rapids, Iowa; and Laurie (Dan) Gaffney of Storm Lake, Iowa; her grandchildren: Tonya Wendel of Alta, Iowa; Jesse Wendel of Sioux Rapids, Iowa; Aaron Wendel of Janesville, Iowa; Nick (Trina) Landmesser of Cedar Falls, Iowa; Brittany Landmesser of West Des Moines, Iowa; Nicole (Lathe) Toft of Omaha, Nebraska; Dr. Tyler (Katie) Wendel of Sioux City, Iowa; Shelley (Michael) Wojcik of Sioux City, Iowa; Adam Noll of Sioux Rapids, Iowa; Brooke and Austin Gaffney of Storm Lake, Iowa; Madison Gaffney of Cedar Falls, Iowa; 12 great grandchildren; one sister Ruth (Larry) Hanusch of Roeland Park, Kansas; many nieces and nephews and extended family and friends. She is preceded in death by her parents; her husband, Floyd; infant daughter, Anita; 6 brothers and 2 sisters.

The family of Hilda Wendel created this Life Tributes page to make it easy to share your memories.

Send flowers to the Wendel family.