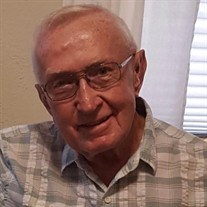 Gerald (Jerry) Joseph O’Meara, age 85, of Indianola, formerly of Schaller, passed away peacefully on Monday, November 1st, 2021 at The Village in Indianola. Funeral Mass will be Saturday, November 6 at 10:30 a.m. at Sacred Heart Catholic Church is Early, Iowa. Burial will be at St. Joseph's Cemetery in Schaller, Iowa. Visitation will be Friday, November 5, 2021 from 5-7:00 p.m. at the Fratzke & Jensen Funeral Home in SCHALLER, Iowa. A Rosary will be at 7:00 p.m. following the visitation. The Galva Legion will be conducting Military Rites. The Fratzke & Jensen Funeral Home in Schaller, Iowa is in charge of arrangements. Jerry, son of William Clare and Viola (Schulke) O’Meara, was born February 18, 1936, in Galva during a blizzard. He was raised there and graduated from Galva High School in 1953. He loved baseball and was an accomplished pitcher during his high school days. Jerry proudly served his country from 1954-56 in the U.S. Army. He also was a railroad dispatcher for several years before attending Buena Vista College, graduating in 1962. He earned his master’s degree in History from Loras College in 1968. On August 10, 1963, he married the love of his life, Rose Eberhart at the Assumption Catholic Church in Charlotte. They were blessed with nine children. Jerry taught high school History, German, Debate, and Social Studies for 35 years starting at Northeast (Goose Lake) (3 yrs), Fort Dodge St. Edmond (2 yrs), and Schaller/Schaller-Crestland (30 yrs). He coached baseball at the youth and high school levels for over 25 years with many successful seasons. He was the announcer for Schaller Rockets Football for many seasons. He also taught classes at Buena Vista College as well as Iowa Central. After retirement, Jerry spent many hours doing genealogy, producing detailed histories of the O’Meara and Schulke families. He was an avid reader and expert crossword puzzle solver. He very much enjoyed watching his children and grandchildren play various sports and was a fan of Chicago Cubs baseball, Iowa Hawkeyes basketball, and Notre Dame football. Jerry was a faithful Christian, baptized and confirmed in the Catholic Church where he was a lector for many years and member of the Knights of Columbus. He was also a proud member of the American Legion. Jerry was always there for his family, especially Margaret and Matthew. He loved it when his kids and grandchildren filled the home. Left to sweetly remember him are his wife of 58 years, Rose, and their children Michael (Marguerite) O’Meara of Indianola, Iowa; John (Deborah) O’Meara of Rochester, MN; Patrick (Ovanda) O’Meara of Indianola, Iowa; Jean (Paul) Knockel of New Sharon, Iowa; Joanne (Brian) McEvoy of Fort Dodge, Iowa; Matthew O’Meara of Indianola, Iowa; and Timothy (Lisa) O’Meara of Waukee, Iowa; 19 grandchildren and 1 great-grandchild; sisters-in-law: LaVonne O’Meara; Alice Butt; Helen Burken; Janet (Don) Parker; Joyce Eberhart; brother-in-law, Joseph (DaVonne) Eberhart; many nephews and nieces. He was preceded in death by his daughter, Margaret Mary; son, Thomas Clare; parents, William and Viola; in-laws, Albert and Rosa Eberhart; brothers, Bill, Jim, and Ron; daughter-in-law, Shelley; brothers-in-law: William, Walter, Robert, and Earl Eberhart; Maurice Butt; Wesley Witt; sisters-in-law: Mary Witt; Beverly O’Meara; Dorothy O’Meara; Vineda Eberhart; Carole Eberhart; Agnes Eberhart.

The family of Gerald O'Meara created this Life Tributes page to make it easy to share your memories.

Send flowers to the O'Meara family.