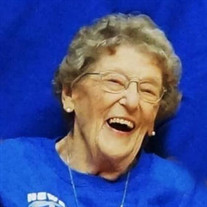 Elvira M. Peters, age 93, of Newell, Iowa passed away peacefully on Wednesday, July 29, 2020 at Methodist Manor Retirement Community in Storm Lake. Funeral services will take place on Monday, August 3, 2020 at 10:30 a.m. at Bethel Baptist Church in Newell to accommodate social distancing guidelines for COVID-19. Burial will be in the Emmanuel St. John Lutheran Cemetery north of Lytton. Public visitation will be held on Sunday, August 2, 2020 from 5:00-8:00 p.m. at the Fratzke & Jensen Funeral Home in STORM LAKE. To watch the live stream of the service, please use the link https://us02web.zoom.us/j/89210195650?pwd=QkYrak12TGFZMVhWZUU5N09SVFY3dz09. The Fratzke & Jensen Funeral Home in Storm Lake is in charge of the arrangements. Elvira Mae Helmbrecht was born February 20, 1927 on the family farm near Lytton, Iowa the daughter of Fred and Augusta (Scharn) Helmbrecht. She later welcomed an infant brother, Ronald, in 1935. As an infant, she was baptized at the Emmanuel-St. John Lutheran Church in Lytton and later confirmed on March 17, 1940. Growing up, Elvira attended country school and graduated from Lytton Consolidated School in 1944. Following high school graduation, Elvira worked at the Creamery in Lytton along with numerous other jobs. She also worked at the Newell Nursing Home for several years as a cook until she retired in 1993. In 1953, Elvira met the love of her life, Warren, while dancing at the Starline Ballroom in Carroll, Iowa. On May 23, 1954, Elvira was united in marriage to Warren Peters at the Emmanuel-St. John Lutheran Church in Lytton. Together, they were blessed with four children: Marc, Jean, Judy, and Jayne. Although Elvira had only one brother, Warren had nineteen siblings and they welcomed her with open arms. Every year they looked forward to celebrating at the annual Peters Reunion that was held in Newell. Elvira was the last survivor on the Peters side. Elvira was a member of Emmanuel St. John Lutheran Church in Lytton where she taught Sunday School for several years. Later in life, Elvira moved to Newell and attended the First Congregational United Church of Christ. In her younger years, Elvira enjoyed fishing with her husband, Warren. Elvira was an avid sports fan. She enjoyed football, basketball, baseball and softball. She especially loved watching her grandchildren play for the Newell-Fonda Mustangs and continued to follow the Mustangs even after they all graduated. In March, she was recognized as the “Fan of the Year” at the state basketball tournament where she smiled from ear to ear. Elvira loved watching her Chicago Cubbies, reading, and playing Bingo. She also enjoyed jigsaw puzzles, word search, and playing cards. Elvira treasured her social visits from Meals on Wheels, especially the deliveries from the high school students. Family was the center of her life and she was very proud of her grandchildren and great grandchildren. She will be deeply missed and remembered as a loving mother, grandmother, great grandmother, aunt, and friend. Those left to cherish her memory include her children: Jean (Roger) Sarchet of Newell, Iowa; Judy (Doug) Carlton of Storm Lake, Iowa; Jayne (Dale) Schumann of Lakeside, Iowa; grandchildren: Rob (Laura) Sarchet of Polk City, Iowa; Jason (Sarah) Sarchet of Hartland, Wisconsin; Luke Sarchet of Newell, Iowa; Chris (Libby) Carlton of Grimes, Iowa; Corey (Katie) Carlton of Creston, Iowa; Jennifer (Chad) Hustedt of Alta, Iowa; Nathan (Natalie) Schumann of Albert City, Iowa; great grandchildren: Hannah, Molly, and Maggie Sarchet; Caden, Kylie, Cruz, and Kinley Sarchet; Ellie, Caleb, and Jax Carlton; Landry, Emma, and Walker Carlton; Paisley, Presley, and Grady Hustedt; and baby Schumann due in September; many nieces; nephews; cousins; extended family and friends. Elvira was preceded in death by her parents, Fred and Augusta Helmbrecht; husband, Warren Peters; infant son, Marc Peters; brother and sister-in-law, Ronald and Elsie Helmbrecht; along with the Peters in-laws. Our hearts will always be on fire for our ELVIRA.

The family of Elvira Mae Peters created this Life Tributes page to make it easy to share your memories.

Send flowers to the Peters family.