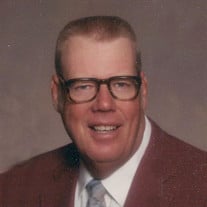 Dwayne R. Ehlers, age 86, of Alta, Iowa died Saturday, March 23, 2019 at the Buena Vista Regional Medical Center in Storm Lake. Funeral services will take place Thursday, March 28, 2019 at 10:30 a.m. at the Zion Lutheran Church in rural Storm Lake. Burial will be in the church cemetery. Visitation will take place Wednesday, March 27, 2019 from 5-7:00 p.m. at the Fratzke & Jensen Funeral Home in STORM LAKE. The Fratzke & Jensen Funeral Home in Storm Lake is in charge of the arrangements. Dwayne Roger Ehlers was born February 12, 1933, the son of Paul and Amanda (Ripke) Ehlers. He was baptized on February 26, 1933 at Zion Lutheran Church in rural Storm Lake, where he was later confirmed on March 30, 1947. Dwayne attended and graduated from Albert City-Truesdale High School in 1951. On December 3, 1967, Dwayne was united in marriage to Phyllis Jean Harms at Zion Lutheran Church in Storm Lake. Together, they were blessed with three children: Dan, Tim and Jeff. Dwayne served in the United States Navy during the Korean War from 1953 to 1957 when he was honorably discharged. He received medals for Europe Occupation and National Defense. Dwayne was involved with several local organizations such as Pork Producers and Farm Bureau. He was a lifelong member of Zion Lutheran Church where he was a church trustee and on the cemetery committee. In his spare time, he enjoyed fishing and traveling. Dwayne also enjoyed his tractor and hat collection. He will be deeply missed by all who knew and loved him. Those left to cherish his memories include his wife, Phyllis of Alta, Iowa; sons: Dan (Dorene) Ehlers of Newell, Iowa; Tim (Taffy) Ehlers of Lakeville, Minnesota; Jeff (Jen) Ehlers of Woodbury, Minnesota; grandchildren: Jenny Ahlers; Ryan (Liz) Ahlers; Gage, Avery and Ryan Ehlers; Madilyn and Chase Ehlers; great-grandchildren: Brooklyn, Irelyn, Bella, River, and Amelia Ahlers; and Andrew Peterson. Dwayne was preceded in death by brothers: Gordon (Margie) Ehlers; Orville (Irene) Ehlers and Edgar (Marcella) Ehlers; sister, Eldora (Luther) Zadow; and grandson, Craig Ahlers.

The family of Dwayne Roger Ehlers created this Life Tributes page to make it easy to share your memories.

Send flowers to the Ehlers family.