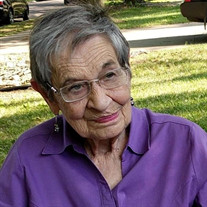 Doris "JoAnn" Kozisek, age 90, of Storm Lake, Iowa died on March 4, 2022, in Nebraska. A Funeral Mass will be held Thursday, March 10, 2022 at 10:30 a.m. at St. Mary's Catholic Church. Burial will be in the St. Mary's Catholic Cemetery. Visitation is Wednesday, March 9, 2022 from 5- 8:00 p.m. at the Fratzke and Jensen Funeral Home in Storm Lake. A Rosary will be held at 7:15 p.m. with a Vigil service starting at 7:30 p.m. at the funeral home. In lieu of flowers, memorials may be directed to the JoAnn Kozisek Memorial. The Fratzke & Jensen Funeral Home in Storm Lake is in charge of arrangements. Doris JoAnn Kozisek of Storm Lake Iowa, finished her journey on this Earth, passing away on Friday March 4th, 2022. She was survived by five children. Doris, known to many as JoAnn, was born in Gothenburg Nebraska on March 30, 1931, being one of seven children. After graduating high school in 1949, she continued her education at St Francis School of Nursing, graduating as a Registered Nurse. It was here, in 1951, where she met Bill Kozisek, whom she would wed on November 6th, 1952 and be a dedicated and loving spouse to for 69 years. After their marriage, they set up residence in Grand Island Nebraska for five years, before heading to Sioux City Iowa, where JoAnn continued her nursing at St Joseph’s Hospital. In 1957, when Bill landed the sales job he was after, the two, now with a couple children, picked up once again and moved to Storm Lake where they lived for the rest of their days. JoAnn spent the next thirty four years working in obstetrics at the Buena Vista Hospital and being very active in her children’s lives by being a Brownie leader, Girl Scout Leader, and very active in the 4H, and Cub Scouts, besides all the cooking, laundry, rides to school, games, concerts, plays, and vacations. Keeping close to her faith, she was a well-known and respected member of St. Mary’s Parish where she was active in The Guild, and The Catholic Daughters, being the Grand Regent for Iowa for two years. As if all that didn’t keep her busy enough, she loved her hobbies. In her later years, when the demands of raising her children slowed, she loved to spend time crocheting, baking, fishing and she maintained a wonderful collection of ceramic Christmas ornaments that would flood the house during the Holidays. Doris is survived by daughter: Janet (Michael) Mims; Patricia Sullivan; Karla Scholl; sons: Thomas (Boneta) Kozisek; Douglas (Junko) Kozisek; grandchildren and one great-grandchild; extended family and friends. Preceded in death by husband, William Kozisek, and daughter, Lori Lea Kozisek. Mom, from your kids, thank you for the unconditional love you gave us. Thank you for the inspiration, your patience, for showing us what real strength is, for the wit, for the serious talks and for all you have done to let us know that from today forward you will still be with us. We Love you and miss you.

The family of Doris "JoAnn" Kozisek created this Life Tributes page to make it easy to share your memories.

Send flowers to the Kozisek family.