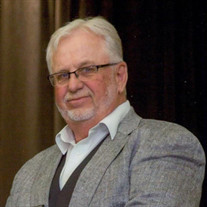 Donald “Don” Bruce Rieman, age 64, of Newell, Iowa, formerly of Rudd, Iowa, died on January 22, 2022, in Omaha, Nebraska. Memorial Services will be held Monday, January 31, 2022, at 2:00 p.m. at Eden Presbyterian Church in Rudd, Iowa with burial to follow. Burial will be in Eden Presbyterian Cemetery in Rudd. Visitation will be from 1-2:00 p.m. at the CHURCH prior to the service. The church requests that masks be worn at the church service. A Celebration of Life Gathering will be held Sunday, January 30, 2022, at 2-4:00 p.m. at First Congregational United Church of Christ in Newell, Iowa. The Fratzke & Jensen Funeral Home in Newell is in charge of arrangements. Don was born September 5, 1957, in Osage Iowa, the son of Jurn and Mary Jane (Stromley) Rieman. He attended Rockford Senior High School where he was active in football, baseball, and wrestling. He married Cynthia (Groesbeck) Johnson. They relocated after the birth of their son, Jesse, to Texas and later had daughter, Candra. While in Texas he worked construction and electrical jobs. In 1992, he moved to Newell, Iowa where he worked several jobs before becoming the greenskeeper at the Newell Golf Course. He took great pride in his work, as he enjoyed his time with nature and soaked up the sun. Don umpired high school baseball and refereed high school football in later years. He was active with Alcoholics Anonymous. Here he discovered a family of people, who together helped shape the last 24 years of his life - one day at a time. He enjoyed spending time with his family and friends, especially his granddaughters. Don is survived by son: Jesse (Halli) Rieman and their daughter Atley; daughter: Candra Rieman (Corvell Cooper) and their daughter Kiana; mother: Jane Rieman of St Ansgar, Iowa; brothers: Dennis Rieman (Bonny Derr) of Garner, Iowa; Del (Kris) Rieman of Newell, Iowa; Doug Rieman of Newell, Iowa; sister: Candice Eimers (Russ Demaray) of Charles City, Iowa; as well as many nephews, nieces, and other family members. He was preceded in death by his father, Jurn Rieman, and brother, Darwin Rieman.

The family of Donald Bruce Rieman created this Life Tributes page to make it easy to share your memories.

Send flowers to the Rieman family.