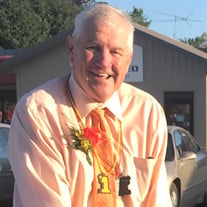 David Kwikkel, age 61, of Storm Lake, Iowa died on Saturday, June 1, 2019 at the Buena Vista Regional Medical Center in Storm Lake. Funeral Mass will be held on Friday, June 7, 2019 at 10:00 a.m. at St. Mary's Catholic Church in Storm Lake. Visitation will take place on Thursday, June 6, 2019 from 4:00-8:00 p.m. with a vigil at 7:30 p.m. all at the Fratzke & Jensen Funeral Home in STORM LAKE. Burial will be on Saturday, June 8, 2019 at 11:00 a.m. at the Riverview Cemetery in Rock Rapids. In lieu of flowers, a memorial fund in David's name has been established. The Fratzke & Jensen Funeral Home in Storm Lake is in charge of the arrangements. David R Kwikkel was born March 19, 1958 in Sioux Center, Iowa the son of Arnold and Donna (Boeyink) Kwikkel. Growing up in Rock Rapids, Iowa, David attended school at Central Lyon where he graduated in 1976. Following high school graduation, David attended the University of Northern Iowa where he graduated in 1981. David then took an Industrial Arts teaching position at Newell Providence where he coached football and basketball from 1981-1987. He continued his education at Drake University where he earned his master’s degree in 1986. On August 1, 1981, David was united in marriage to Juli Ihry in Royal, Iowa. Together, they were blessed with two children: Alex and Jaye. Education was very important to David and he worked for many years in administration. He was a high school principal for Crestland High School from 1987-1989. Schaller-Crestland Middle School Principal from 1990-1993 and a TK-8th grade principal for Schaller-Crestland from 1993-2003. David also was a superintendent for Schaller-Crestland from 2003-2010 and for Galva-Holstein and Schaller-Crestland (Ridge View) from 2010-2015 until he retired. He was proud to help mentor and serve not only students but faculty and staff as well. David was a member of SAI, NAESP, and AASA. He was the Elementary and Middle School Principal of the Year in Northwest Iowa; and Superintendent of the Year in Northwest Iowa. David received Citizen of the Year for the Storm Lake Times; and served on the Highway 20 Board for this region. David was also a member of Sacred Heart Catholic Church in Early, Iowa. David was an avid Iowa Hawkeye fan and enjoyed cheering on the Hawks. In his spare time, he loved watching and building trains and tinkering with his own train sets in his basement. Family was very important to David and he treasured spending time with Juli, Alex and Emma, Jaye, and baby Lydia especially at Pop-N-Doc’s in the summer. He will be lovingly remembered as a son, husband, dad, grandpa, brother, uncle, cousin, and friend. Those left to cherish his memory include his wife, Juli Kwikkel of Storm Lake, Iowa; children: Alex (Emma) Kwikkel and their daughter, Lydia of Decatur, Nebraska; Jaye Kwikkel of Alta, Iowa; parents: Arnie and Donna Kwikkel of Rock Rapids, Iowa; brothers: Doug Kwikkel of Milwaukee, Wisconsin; Mark Kwikkel of Decatur, Nebraska; sister-in-law, Jill Kwikkel of Waterloo, Iowa; nieces; nephews; cousins; extended family and many friends. David was preceded in death by his brother, Steven Kwikkel.

The family of David Kwikkel created this Life Tributes page to make it easy to share your memories.

Send flowers to the Kwikkel family.