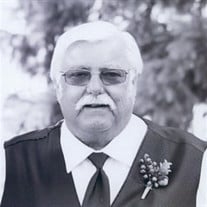 David Koth, age 72, of Alta, Iowa died on Tuesday, December 25, 2018 at the Methodist Manor Retirement Community in Storm Lake. Funeral services will be held on Saturday, December 29, 2018 at 10:30 a.m. at the St. John Lutheran Church in Hanover. Burial will be in the church cemetery. Visitation will take place on Friday, December 28, 2018 from 5:00-7:00 p.m. at the Fratzke & Jensen Funeral Home in ALTA. The Fratzke & Jensen Funeral Home in Alta is in charge of the arrangements. David James Koth, the son of Harvey and Lydia (Langhans) Koth, was born on September 24, 1946 in Storm Lake, Iowa. In his youth, David was baptized at the St. John Lutheran Church in Storm Lake and confirmed at St. John Lutheran Church in Hanover, where he remained a life long member. David attended grade school at St. John Hanover until 8th grade. He then attended Alta High School, where he graduated in 1964. David was united in marriage to Kathy Pace in Alta. To this union, there was one son born, Michael and he welcomed in a step-son, Tim. Throughout his working career, David farmed for 50 years, trucked for DeKalb for over 40 years, and was a seed salesman. He also was a member of the Alta Fire Department for 25 years with 10 years as Fire Chief. In his free time, he enjoyed fishing and spending time with his family. His hobbies included tractor-pulling and keeping up with Nascar. In his younger years, he liked to travel with friends. He will be deeply missed by all who knew and loved him. Those left to cherish his memory include his son, Michael (Tammy) Koth of Alta, Iowa; step-son, Tim (Kari) Limbert of Early, Iowa; brother, Paul (Donna) Koth of Alta, Iowa; sister, Lois (Lynn) Theesfield of Ames, Iowa; nieces and nephews: Matt Koth, Leah (Sam) Kolner, Gretchen Theesfield, and Charles (Jena) Theesfield; and extended family and friends. David was preceded in death by his parents, Harvey and Lydia and infant sister, Ruth Koth.

The family of David James Koth created this Life Tributes page to make it easy to share your memories.

Send flowers to the Koth family.