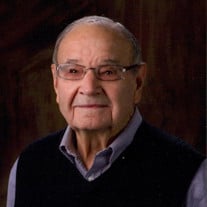 Clifford H. Schmidt of Storm Lake, and formerly from the Holstein and Galva areas, passed away peacefully at one of his daughter’s homes on Friday, February 26th, 2021, surrounded by family. Funeral services will be held on Tuesday, March 2, 2021 at 10:30 a.m. at St. John Lutheran Church in Hanover. To watch the recording of the service, please visit Cliff's tribute wall. Burial will be in the Buena Vista Memorial Park Cemetery in Storm Lake. Visitation will take place on Monday, March 1, 2021 from 5:00-8:00 p.m. at the Fratzke & Jensen Funeral Home in STORM LAKE. In lieu of flowers, memorials may be given to the Galva American Legion at PO Box 122 Galva, Iowa 51020. Masks and social distancing are required for all guests in attendance. The Fratzke & Jensen Funeral Home in Storm Lake is in charge of the arrangements. Clifford was born May 23, 1926 to Harry and Josie (Doehla) Schmidt in Holstein, Iowa. He was baptized and confirmed at the Holstein Lutheran Church. Clifford attended the rural country schools through the eighth grade and graduated from Galva High School in May,1943. He entered the U.S. Navy on February 21st, 1945 and served on the aircraft carrier USS Puget Sound (CVE-113) in the South Pacific. On July 12, 1946, he received an Honorable Discharge and returned home to the family farm. He worked for area farmers and also worked construction. November 18th, 1965 he was united in marriage to Arlene (Gerke) Spears at St. John Lutheran Church, Storm Lake. At this time, he transferred his church membership to St. John. He left the farm and started working at Hygrade Food Products in May 1966. In April of 1976, he left Hygrade and started to farm south of Hanover. He built a new home and the family moved to the farm and transferred their membership to St. John Hanover. While there, he served in various roles and was a member of the Men’s Club. Cliff and Arlene retired from farming and moved back to Storm Lake in November of 1988. Arlene passed away on May 20, 1993. On October 18th, 1997, Cliff married Doris (Combes) Radke and they continued to live in Storm Lake and attended St. John Lutheran, Hanover. While Cliff held many jobs during his working life, at his core he was always a farmer. He continued to watch Market to Market and could recite current commodity prices until his final days. Cliff was an early progressive when it came to farming practices. He installed terraces and tile on his ground in the early days and held leadership roles in the B.V. County Conservation Board. Cliff also allowed windmills to be installed on his land to add a measure of sustainability/conservation to the farmland. Early in his retirement Cliff spent much of his time helping Connie and Kelly Clough operate the Casino Beach Marina. The Marina offered a great combination of several of his loves—working with his hands, operating tractors/mowers, and fishing. Cliff was also very generous with his time. Not only did he lead various church projects over the years but he also helped each of his children with projects in their homes. Until the last years, Cliff continued to enjoy traveling to Branson, Missouri for the Christmas shows and meeting the gang at Hy-Vee for coffee. When visiting Cliff at home it was not uncommon to hear polka music playing in the background. Cliff loved his grandchildren and made it a point to let them know it. Often perceived as a quiet man, Cliff was fair, faithful, kind and steadfast. He let his actions do most of his talking. Cliff is survived by his wife, Doris, daughters, Connie (Kelly) Clough of Linn Creek, MO, Cathy (Chuck) Rupnow of Chanhassen, MN, and Carla (Nick) DeRoos of Sioux City, IA. Also survived by step-children, Cheryl (Don) Altena, Storm Lake, IA, Sandi (Randy) Lowe, Albertville, MN, Greg (Donna) Radke, Midland, TX, Julie Kelly, Evansville, IN, and Barb (Dave) Jacobson, Spencer, IA; One brother, Willard Schmidt, Alta, IA. and grandchildren, Christian, Callie, Shelby, Noah, Jonah, Lily, Michelle, Leah, Eliza, Olivia, Cody, Montana, Megan, Tanner, Paige, Dallas, Darby, Brittany, Nathanial, and Carly. Also survived by 13 great-grandchildren, and many nephews and nieces. He was preceded in death by his first wife, Arlene, his parents, Harry and Josie Schmidt, and many sister-and brother-in laws. The family requests that in lieu of flowers, gifts be made to the Galva American Legion.

Clifford H. Schmidt of Storm Lake, and formerly from the Holstein and Galva areas, passed away peacefully at one of his daughter&#8217;s homes on Friday, February 26th, 2021, surrounded by family. Funeral services will be held on Tuesday, March... View Obituary & Service Information

The family of Clifford Schmidt created this Life Tributes page to make it easy to share your memories.

Clifford H. Schmidt of Storm Lake, and formerly from the Holstein...

Send flowers to the Schmidt family.