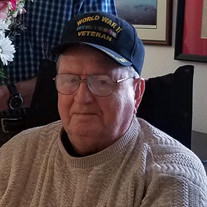 Calvin William Binder, age 95, peacefully passed away with his wife by his side on Sunday, February 24, 2019. Memorial services are not being held at this time. The Fratzke & Jensen Funeral Home in Alta is in charge of the arrangements. Calvin was born to Fred and Alva Binder in Oak Hill, Kansas on February 3, 1924. He was the second child, and oldest brother of five children born into the family. He met the love of his life, Freda Gunter, in high school. Calvin entered the Army Aircorp in WWII and before leaving to go overseas he and Freda were secretly married. He was stationed in Italy where he was a tail gunner on a B-17 crew. When he returned from service, they took up farming outside of Oakhill, Kansas. They subsequently moved to northwest Iowa to farm in 1953. In 1963 Calvin was one of the early patients to successfully come through open heart surgery. He retired from farming a couple of years later and spent the rest of his career selling insurance in northwest Iowa. In 1975 they moved to Alta, Iowa where they lived for 23 years. Calvin enjoyed golfing and socializing with their many friends and family. In 1998, Calvin and Freda moved back to Kansas where they lived for five years before relocating to the sunny climate of Georgetown, Texas. They enjoyed 11 years of golf, cards, and socializing before moving into a nursing home in 2014. In 1979 his B-17 crew reunited and had annual reunions for many years. This group became family and he looked forward to the time they had together. Many stories were told and retold and many new memories were made. People who knew Calvin will remember his amazing big laugh. He was a gentleman to the end and he will be remembered for his fairness, kindness, inner strength, and friendship. Calvin was preceded in death by his parents, his brother Wayne, sister Ruth, and sons Bill and John. In addition to his lifetime love, Freda, Calvin is survived by daughter Marilyn and Bob Saathoff, son John’s wife Kathy Binder, son Scott and Denise Binder, seven grandchildren, two great-grandchildren, sister Leona and Truman Woelhoff, brother Merle and Noleen Binder, and many nieces, nephews, and cousins. The family is not having a service at this time. Memorial monies can be sent in his name to a charity of your choice.

Calvin William Binder, age 95, peacefully passed away with his wife by his side on Sunday, February 24, 2019. Memorial services are not being held at this time. The Fratzke & Jensen Funeral Home in Alta is in charge of the arrangements. Calvin... View Obituary & Service Information

The family of Calvin William Binder created this Life Tributes page to make it easy to share your memories.

Calvin William Binder, age 95, peacefully passed away with his...

Send flowers to the Binder family.